According to a 2019 poll conducted by the American Society for Dermatologic Surgery, unwanted body fat is the top aesthetic concern for patients—and for the past decade, many of those patients have found a solution in CoolSculpting. As a leader in the fat-reduction space, CoolSculpting uses cryolipolysis technology to freeze and kill targeted areas of fat while leaving the surrounding area unharmed. Now, 10 years after coming to market, the manufacturer is releasing the second generation of its popular device, CoolSculpting Elite. 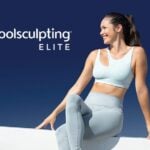